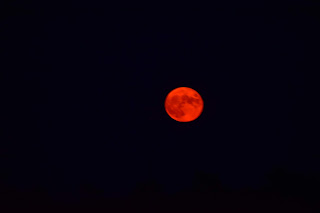 When did Christianity become so disconnected from the Earth? So separate from the rhythms of nature that bring us back to the place of wonder and humility as we find again the brilliance of life rising out of the water?

We headed to the shore this evening to watch the moonrise. I hated the resurgence of the mosquitos, which considerably dampened my experience (but since they have been fairly absent for most of the summer...No, I will not give these minute terrors any excuses as I sit here, suffering from literally 20 bites on my legs. Believe me, I counted them as I slathered on the Benadryl cream.)

A few of us gathered on the beach eagerly awaiting the rising of the moon, trying to guess where it would appear, all the while trying to prevent my children from splashing in the water (in their PJs) or making sand angels. It felt like a holy space, the anticipation of the slow rising of light and the delight in discovering the hazy red glow of the Harvest Moon before us. 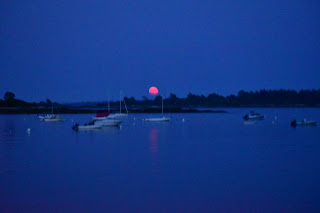 I knew God was there, though there was no Invocation (but for the casual conversations as our eyes scanned the horizon). There was no Prayer of Confession, except, perhaps, for the realization that there are forces at work far larger than us - that even though I don't see the moon (yet), the moon sees me even through the clouds and grants forgiveness for ever doubting its presence. There was no Proclamation of the Word or sermon but for the silent rising that declared the constant presence of a God that bears silent witness to all that is carried in the shadowed places and meets it all with love and grace. There was no Benediction but for the laughter of tired children running back to the car, somehow unscathed by mosquito bites but also sandy as all get out.

How much have we lost by not acknowledging and celebrating these small, sacred moments? Not as a substitute for the larger gathering of the Body of Christ (because, as one of my new favorite quotes from Rev. Lillian Daniel states, "Any idiot can find God alone in the sunset. It takes a certain maturity to find God in the person sitting next to you who not only voted for the wrong political party but has a baby who is crying while you’re trying to listen to the sermon.”) but as equally deserving of notice and attention - a kind of worship that draws us back to creation and our utter reliance upon the very rhythms that mark time and season.

There's something about the island that allows us to come back to that space, that invites us to remember how much we are governed by forces beyond our control, not in a spirit of determinism, but in one that is a give and take of action and response, of movement and stillness, of high tide - and low tide. Certain streams of Christianity would have us think that we (in partnership of God, of course!) are the makers of our own future - that any future we so desire and aspire to is one within the will of God.

Watching the moon rise, seeing the tide come in, feeling the sun slowly warm the sand, reminds us just how much we are not able to control our lives.

I'm not sure where I'm going with all of this, except this evening, as I watched the moon climb higher in the sky, as I noticed other people share on social media their own rituals this particular moonrise, I feel the desire to dig deep and acknowledge the ways God is made known in Jesus who walks alongside us, is made known in the works fashioned and sustained by God's own heart, is made known in the gathered body on Sunday mornings and on Saturday nights to watch the glorious moon rise above the water.

Posted by Melissa Yosua-Davis at 10:25 PM