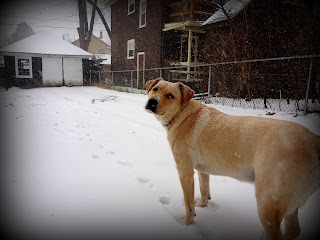 It has been a few weeks since I've posted here; lots of stuff has been happening - a ramp up in fundraising for the trip to Guatemala, a trip to DC (to be blogged about later), snowstorms, and Lent has begun. This year, Ben and I (along with Natalie, our current housemate) are posting everything we eat on Intstagram with the hashtag #40daylentchallenge. Social humiliation diet (although I do appreciate what my friend on Facebook said about it being an alternate form of table grace. There's a post in there somewhere).

I'm also doing the Rethink Church Photo-A-Day project (again on Instagram with hashtag #rethinkchurch). Fun times. I enjoy taking pictures - and it's a lot easier since my parents got me an Eye-Fi card for Christmas (yay mom and dad!) It essentially uploads pictures to the internet straight from my camera.

One day, I hope to do more with my photography - especially when it comes to editing pictures and enhancing colors and the like. I feel like I have a decent eye to begin with; I try to get shots that convey a meaning and a message and are fun to look at -- and that tell a story. I am looking forward to going to Guatemala with my camera for just that reason - the opportunity to tell a story with what I capture.

More to come: a debrief from the Global Board of Church and Society Young Clergy Leadership Forum, my fun new hobby (yes, I will survive the zombie apocalypse), and some thoughts about liberation theology. Stay tuned!
Posted by Melissa Yosua-Davis at 2:41 PM No comments: 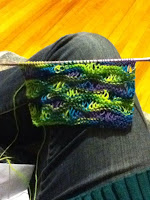 This is a picture of my current knitting project. Pretty, right? It's super fun and easy to make (pattern here). Problem is, this may be the 20th craft project that I've started.

I love starting things. Books, computer games, projects - doesn't matter what. But I really stink at finishing. Sometimes, as is the case with some books, I discover half-way through that it isn't worth my time finishing it and so back it goes to the library, the end never to be revealed to me. (I used to feel guilty about quitting books, but there are so many good books out there that I shouldn't waste my time on the ones I don't enjoy). Sometimes, I don't finish projects because I don't want the good times to end. This happens mainly with computer games or TV series (for instance, I haven't seen the last two or three episodes of Firefly. Yes, I do have Netflix).

Usually, though, it's because I love to start new projects. I get bored with the old stuff. I have two-thirds of a sock on a set of needles. I have a lacy pullover I've been working on forever. I have a skirt that just needs some light finish work (think: elastic band). I have two cross-stitch projects that will take me until I'm eighty to finish (no matter how much I work on them). I have a wedding present in process...from five years ago. Oops.*

I should really take pictures of all these works-in-progress for some accountability purposes. I could make it a goal to finish some of these projects by the end of the year. I could have all of you, dear readers, encouraging me on to get them all done.

But that would just be another project to start...and never finish.


*This doesn't include the unfinished projects that I inherited from both deceased grandmothers. Yikes. I'm totally going to be them when I'm older. I pity my poor future grandchildren.
Posted by Melissa Yosua-Davis at 2:39 PM No comments: