It’s been a year.

Looking back, there were some things I anticipated about the church I serve leaving the United Methodist Church - the enormous amount of work forming an independent entity, the need for finding connection and community in new ways, the importance of my own discernment regarding my relationship with the denomination that formed my faith since birth and the need to figure out where I would eventually land.

What I didn’t anticipate was how profoundly the events of Annual Conference last year would reveal how toxic a system the congregation I serve was leaving.

For those who took the time to call, text, write, or email in the aftermath of those days, I am deeply grateful. I didn’t anticipate how deeply painful those few days would be - from having your future debated without being able to be present to having the integrity of your ministry questioned to the outright manipulation of the process. There are many specifics of those days I do not remember clearly (though I can go back and read the transcripts or see the screenshots of the outright lies shared on social media if I ever wanted to remind myself of how horrific it was) but my body continues to remember these things. It knows the cost. I continue to feel the deep relational betrayal - not primarily from those who were most vocal against disaffiliation, but from the many who sat in silence, including those who had nurtured my call to ministry, supported me as I went to seminary and in the work of planting a new faith community.

In light of how those proceedings were held, even though there was a pathway created for retaining United Methodist credentialing while I considered my own relationship to the UMC while serving a disaffiliated congregation, there was no way I could continue to remain professionally associated with United Methodism and hold on to my own professional, personal, and spiritual integrity. 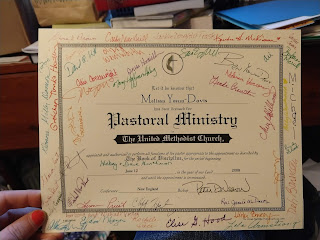 About a month after the church’s disaffiliation became official, I was asked to surrender the piece of paper that granted my license for ministry, despite it clearly stating on that document that I was only authorized for pastoral ministry until the appointment was terminated. This, of course, would clearly have been given that the congregation was no longer United Methodist. This letter, along with a cursory email checking in on my status before the church disaffiliated and a brief email confirming receipt of my license, was the extent of any official communication from the New England Annual Conference or its committees as it pertained to my experience. I sent in the license (decorated with the signatures of people who continue to affirm my call and ministry) along with a letter to the bishop, which detailed my concerns about the events that transpired on the floor of Annual Conference last year, with copies sent to my former district superintendent and the co-chairs of the Board of Ordained Ministry. (Incidentally, I know of no other local pastor who has been asked to turn in their license upon ending their appointments).

For those people who have reached out to me for conversation and sharing, I am deeply grateful. I appreciate all who have prayed for me and for the church I serve as we’ve navigated this year. For me, it has been a year of mourning, as I grieve the loss of the people called United Methodist in New England, who have been my community since I attended my first Annual Conference in high school. It has been a year of unlearning a lot of assumptions about what connectionalism can and should be. It has been a year of emerging relationships and networks and taking tentative steps into new beginnings. It's been hard and liberating and clarifying and there are times I continue to mourn - for myself and what I had hoped the UMC could be. There has also been incredible freedom in pursuing new paths and new relationships.

Those of you who know me know that I’ve never been much of an institutionalist. I’ve always gravitated toward ministry on the edges and in the more overlooked places, from the streets of downtown Haverhill to the resilient shores of Chebeague Island. I’ve always had a heart for God’s unfolding dream among a people and in a place, and I’ve sought to follow God’s leading faithfully. I’ve also been one to hope that the UMC, particularly in New England, could position itself to adapt to the uncertainty facing the denomination’s future, particularly in light of our changing religious landscape in our country. I also had a sense that God could work powerfully within the system and there were times I served on conference committees, believing that the work made a difference for the church and for the world.

However, last year’s Annual Conference demonstrated that allegiance to institution is the paramount value that drives the denomination, that there is only one permitted way to faithfully respond to God’s call for inclusion which is to stay and fight, and that there are relational costs to pay for divestment.

To those of you attending Annual Conference in New England this week, I’m sure there will be acknowledgements of how painful last year was. There will be comments about broken trust, the need to heal. An image of the Beloved Community will be lifted up. I’m sure you will talk about brave space conversations and the hope of moving into the future marked by liberation and inclusion. To me, those are empty words, bereft of the work of confession and repentance. You want to “heal” not for the sake of transformation, but to absolve yourself of the guilt and harm you’ve caused - not just this past year, but for decades. I don't want to minimize the pain that others experienced last year, but please don't pretend that hurt and pain was all one-sided.

Jesus said you will know them by their fruits. What I observed and experienced last year - the lies, the manipulation, the weaponized pain, the silencing - demonstrate that there are more serious and systemic issues to grapple with than policy change. While full inclusion is a necessary step for justice, cycles of harm will continue unless deep work happens around how people extend grace to one another, honor pain, and entrust each other to God's care.

As you move forward this year at Annual Conference, please consider what that work might actually look like and have the courage to do it. It won’t be through empty words or hollow resolutions, but through reflection and repentance for the harm caused as part of the disaffiliation process. While there may be no way for me to restore my trust in you as a body or as people seeking to faithfully embody Jesus in this world, I pray that you may have the wisdom to show others more grace than you did me.

Posted by Melissa Yosua-Davis at 9:19 PM