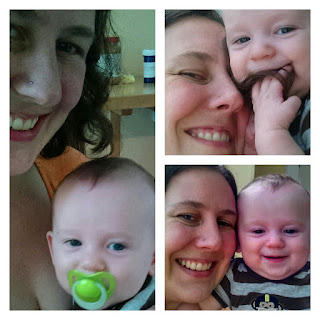 I don't know how it happened, but all of a sudden I have a little boy who crawls, can sit on his own, has cut a tooth, and pull himself to standing. He has this silly little sigh he makes when he finds something amusing (he's not a particularly giggly baby) and has a quick smile for just about everyone he encounters. He loves fabric and music and scratching things and beating time with his hands on objects (particularly the dog's food bowl). He enjoys grabbing my face to suck on my nose and bouncing up and down on his legs. He's got such a charming personality that's really shining through, though we've seen the seeds of it from when he was very young.

I can't believe that only 6 months ago, we had this small, completely helpless newborn on our hands and I was pretty much living inside of a pillow fort between the nursing sessions and general discomfort in the aftermath of delivery. I had night duty and Ben had day-duty so I could rest. Television was essential for survival - mostly so I could stay awake to nurse. We counted wet and dirty diapers and hours since feeding like it was some kind of touchstone to reality. I won't tell you how many google searches I made for "normal" - spit up, poop, sleep - you name it, I searched it.

Yet now, the sleep-deprived haze that induced hallucinations has receded into a mild fog that leaves my brain slipping gears only a few times every day. Clothes are gradually fitting better. It's not a production to take him places with me. There are more normal days than not. I've hardly googled anything strange recently. 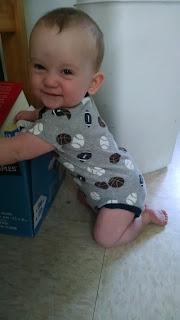 Even though everything seems to be going smoothly and this tiny baby is fast growing into a tiny person, it is still hard. There are days that leave me exhausted, knowing that I'll be awake at least twice during the night to feed him and up for the day as early as 6. I worry that nursing him to sleep for naps and at night, or holding him when he fusses in his crib, is just going to bite me in the butt later on, but right now it's the stress-free (or at least, less-stress) way to get him to relax enough to fall asleep. There's a lot I can't do while I watch him because he is so mobile (and into everything!) and I try not to let that stress me out. I finally had to delete the email app on my phone because I was thinking to much about work while on Michael duty (and I should probably stop watching all my Michael videos when it's my turn to work, *sigh*).  I am really struggling with this part-time work-largely-from-home "balance" that seems so elusive. Part of it is that there's *always* something to do - the sermon to write, the meeting to prepare for, people to visit, and as much as I try to think several weeks ahead, it's a challenge not to become a slave to the urgent, That and I tend to also be thinking about dinner that needs prepping and laundry that needs washing and so I'm multitasking work and home all the time.

I don't feel like I'm trying to be super mom...and I don't feel like I'm trying to be a super pastor either. I'm just trying to survive and not let the whole ship go swirling away into chaos. Most days are fine, but the bad days....well, it's a good thing that take-out Chinese is an impracticality, else those clothes wouldn't be fitting nearly as well. It's a reminder for me that I'm probably my harshest judge, that I'm only three months in to figuring this work/life rhythm that will be an ever-changing dance. It's a reminder that grace covers a multitude of sins and I am certainly not the only new mother who has wrestled with these same questions and had to come up with their own solutions.

What mine will be remains yet to be seen. But I trust that it will come - and when it does, it'll be time for another change!

Posted by Melissa Yosua-Davis at 3:32 PM