A Vacation of a Lifetime 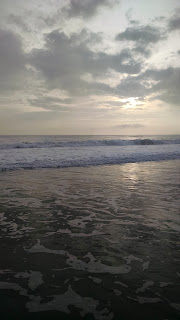 "It's the first adult vacation we've ever taken together!"

It dawned on me a few times after we had said it that this sentence might be misconstrued to mean something other than what we had intended.  Granted,  we'd always elaborate, saying that it's the first time we've ever really vacationed anywhere that wasn't either visiting relatives or owned by relatives or relatively near relatives.

Calling this a "grown up"  vacation doesn't really fit either, even though we've certainly consumed enough "grown up"  beverages for it to qualify.

This is our first time out of the country together,  discovering a new place together, really travelling together and we've kinda joked around saying it is our second honeymoon. This August will be eight years married for us.  Ten years together.  Almost fourteen years since we first met and became friends. So -  I think the terminology fits,  especially since we are unlikely to get another vacation in like this for a long time.

So far,  it's been pretty awesome. We've both felt the need to unwind and relax,  which has basically translated to two full days on the beach and evenings out on the terrace in the hammock.  Today we didn't even venture in to town (which is about a 25 minute walk along the beach).  I can't remember when I've had no responsibilities beyond whether I should swim before or after lunch.

Tomorrow we're hoping to be a bit more active and venture in to Puerto Viejo for some shopping and cheap empanadas.

One thing that is on the shopping list?  A hammock.
Posted by Melissa Yosua-Davis at 10:49 PM